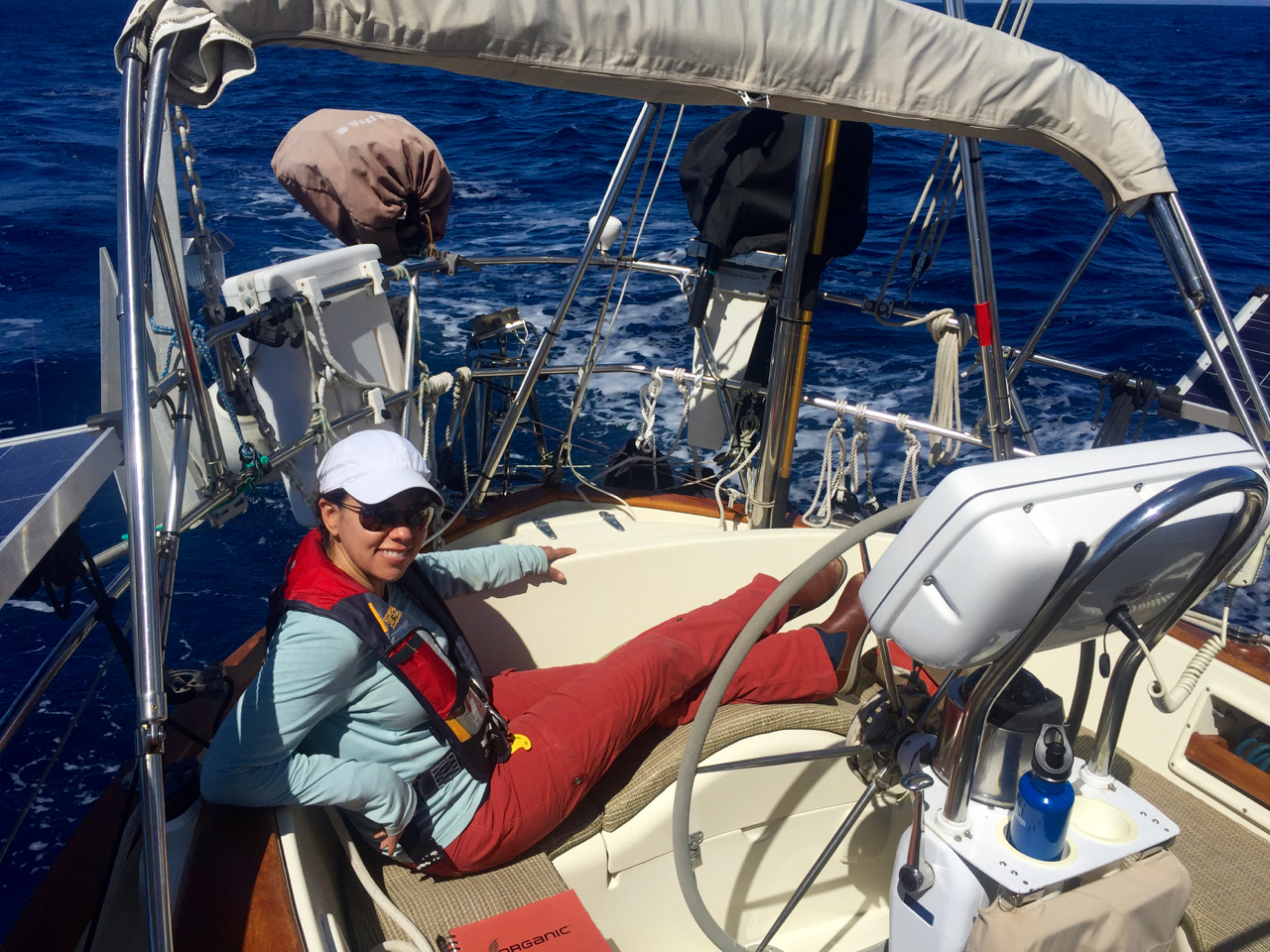 After a month in Ensenada, where the majority of our time was spent scarfing down various mariscos and sundry goodies, we bid goodbye to Marina Coral and set off to Cabo, ready to sail 710 nautical miles, or roughly seven continuous days at sea.

Despite affixing a scopolamine patch behind my ear as instructed, my first full day at sea was spent doing nothing more than sleeping or moaning. Sam the cat was in the same boat (pardon my pun), immovable as well, nor eating or drinking water. We had big swells for quite a bit and motored for over an hour until we were in better seas. When we did raise the sails that first afternoon, the wind left us bobbing around slowly for a few hours. The wind finally picked up in the late afternoon, and we were treated to a moon rise and leaping dolphins in the distance.

Early morning during my watch, we had more dolphins leap by the boat, and while I was leaning out over the rail admiring them, a dark patch in the water caught my eye. A large turtle was swimming by. A beautiful bird with dark, long wings is swooping around the boat in large circles, gliding up over the crests and low into the troughs of the waves, barely skimming the water. He’s the only bird around and he repeats his wide circles and glides on and on over the waves, seemingly never needing to beat his wings.

Despite the clanging of the boom due to light winds, it’s nice. The seas are less rolly today and I’m able to make a proper meal while at sea. I whip up a double batch of dal, enough to last us two days. Sam is looking better too and we’re both active today. Scott luckily never deals with seasickness. We finally get good wind in the afternoon, 13 knots on our beam. The mainsail and the jib are out, the solar panels are angled to the sun, and the wind generator is buzzing. We’re making more power than we’re using! Nighttime, however, was a different story. The wind moved to our stern and made us unable to adjust our course to port, as desired. Our wheel also started squeaking and as the night went on, it only got noisier, making it difficult for us to sleep.

We saw one sailboat yesterday, but other than that, we mostly see cargo ships. At sunrise, two cargo ships passed us in the distance. We’re on a starboard tack and the wind is still at our stern and it’s quite a ride. We’ll need to jibe eventually as we want to go to port. Scott is reluctant to do so or at least wants to remain on this course for a while longer. While it takes us out of our way, jibing now will mean shifting our course to a point where we’re directly pointed towards land. His hope is that the wind will shift enough so we don’t have to jibe.

We’re having croissants for breakfast this morning! Not intentionally, though. Scott turned off our refrigerator yesterday morning to get better SSB reception and the temperature in the freezer went from 15 to 27! He turned the power back on last night but it still hasn’t recovered and a bunch of our frozen goodies are starting to slowly defrost. Lot’s of things are breaking – the select buttons on the chart plotter fell off and the macerator is broken.

Our watch schedules are tiring. Scott has the first watch from 8-11pm, then I come on from 12-2am and then again from 5-8am. The 5-8am watch is a killer. We are both bleary-eyed in the am and need naps throughout the day to replenish. I stay awake by listening to podcasts or music. Scott listens to podcasts or hand steers to stay awake.

We both took our first showers at sea and on the boat. Previously, we’ve showered in the marina, and not on the boat. We’re running our watermaker but we’re both consencious about not wasting water so no luxuriating under a steady steam of steaming hot water. Navy Showers only!

Scott found a dead squid on our deck this morning. We’ve heard stories of cruisers waking up to find dead flying fish on deck, but we didn’t experience that at all. Good thing as we’d be sad about it, although Sam would likely be thrilled. We haven’t seen any other sea life. No birds, no dolphins, and no turtles.

Speaking of Sam, he’s truly a sailor cat now! He’s moving about the boat when it’s rocking and rolling, climbing up the companionway stairs, and eating his food regardless of sea state. He’s primarily hanging out with us in the cockpit and is doing very, very well. We are very proud!

The winds are so light. We took the reef out of the mainsail today. The winds are so light that sometimes the mainsail slaps, but mostly we hear the lapping of the water against the side of the hull and the quiet hum of the compressor working unsuccessfully at cooling our food (we’re above the freezing point and having croissants for breakfast every day now). Looking around us, we see nothing but endless sea and sky. We’ve even stopped seeing container ships, we’re so far out now. It’s tranquil, the sun is warm, and we’ve shed our foul weather gear and long pants. I’ve come to like the pace at sea. We mostly read. There are many quiet moments where we gaze out to sea. Sunsets and sunrises are spectacular and the nighttime treats us to a few hours of incredible darkness before moonrise, and then a contemplative silence envelops the cockpit while we’re on our watches, the other asleep below.

Last night, a bird hitched a ride on our mast. He circled our boat for a long time, trying to find a safe landing. After multiple attempts and aborts, he grabbed onto the swinging mast and stayed up there for 12 hours.

In the morning, while walking around deck checking for chafe, Scott discovered the boom vang worked itself loose! Scott found the washer and bolt and a piece of sheared off metal right underneath. We quickly and safely brought the mainsail down and we’re sailing with only the jib and hoping that the boom vang can stay put until we get to Cabo. Quite scary!

Everything has gone crazy! Lots of wind and with no mainsail up, we’re swinging from side to side. We’re going fast, almost 7 knots, on jib alone. We both had stressful watches as things flew around inside the cabin. Cooking was a no go so we both had Clif bars for breakfast.  We were happy to finally be on our final approach to Cabo with land in sight, but were taken by surprise as to how busy it is in the bay: two cruise ships anchored*, 4-5 parasails, water taxis, and many, many jet skis. The wind was insane coming into the bay, and with the wind, dodging parasailors, and jet skis, we were stressed.

When we finally got inside the bay, an anchorage with a submarine canyon and a narrow shelf upon which yachts can anchor, we had 20 knots of wind in addition to the craziness around us. We came around, dropped 150 feet of chain, backed down, and promptly dragged. We looked for another spot to drop anchor and were stymied by jet skis and water taxis. Frustrated, tired, and overwhelmed, we headed back to sea, only to calm down and decide to try again.

Third try was the charm and here we are, after seven continuous days at sea anchored, tired, and weary in Cabo.

* The Norwegian Jewel has the distinction of passing us twice during our passage as they go from Cabo to LA.

One thought on “Ensenada to Cabo”