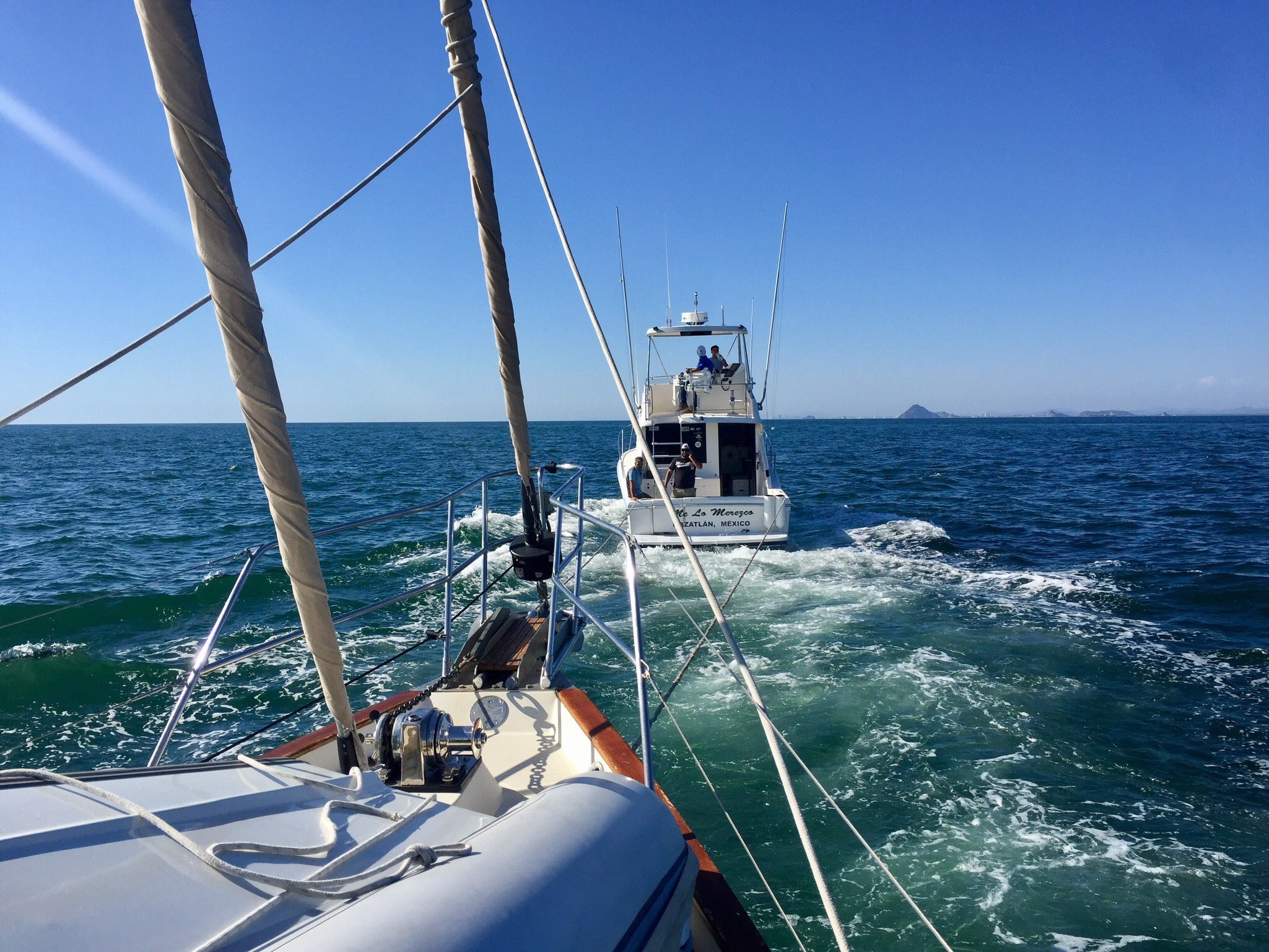 Our last night in Matanchen Bay was really nice. We grilled pizza and enjoyed a mostly still night in the anchorage followed by an early morning rise to prep for the overnight sail to Mazatlan and the Stone Island anchorage.

We raised anchor and as we motored past the entrance to San Blas we heard and felt a slight shift in engine sound. I brought it up to Scott but we didn’t know what it was and it eventually went away.

We found some wind and sailed, mostly close-hauled, which kept us a little heeled over and making for a not so fun sail, but better to sail than to motor! But, like it does sometimes, the wind died in the evening and we motored through the night and early morning. Throughout both of our watches, we had moments were we heard rumbling and knocking, and we both questioned whether the engine seemed louder than normal, but we kept on going as the engine seemed to be alright.

At 6:00am I took over. We were only a several hours away from Mazatlan. While Scott slept down below, I kept a watch for boats and buoys. We passed several buoys out about 25 miles out from Mazatlan, sets of three buoys tied together, sometimes with palm fronds and coke bottles to help keep them afloat. The engine was running at 2800 RPM, as it had been for several hours now. I began to hear subtle shifts in sound from the engine, deep rumblings. We heard some rumblings earlier too, but the engine seemed fine. I checked the temperatures and they were normal so I didn’t wake Scott up to point out yet more rumbling.

A little before 9am, I made myself some tea. Twenty or so minutes later I smelled something burning and ran down the stairs, thinking I left a burner on. I did not. As I walked back to the companionway to go upstairs, the smell got stronger, which meant it was coming from the engine so I woke Scott up.

We couldn’t easily turn off the engine because our stop button, which is in the cockpit, was broken. Instead, we have to go into our quarter berth, open up a side door and, with a long flat-head screwdriver, stick our hand in the engine compartment and push down engine stop solenoid arm to turn it off (Note: we thought the stop button was a convenience not a safety issue. We were wrong!) This time though when Scott opened up that compartment, a bunch of smoke poured out. We stopped the engine and when enough smoke cleared and we saw that our PSS shaft seal had melted. The shaft seal is what keeps water from coming into the boat through the hole that the propeller goes through. Kind of important! Did one of those buoys get caught in our prop and cause this? Did all that rumbling lead to this? We’d have to wait until we were safely at a marina to investigate. In the meantime, the amount of water coming into the boat was easily managed by our bilge pump, so we were not in immediate danger of sinking.

We were 23 miles out from Mazatlan. We had no way of using the engine and we had no wind to sail, and no way to maneuver into a marina slip. We had no cell phone service and we were too far out to use our vhf radio. We used our satellite phone to email our friends Kirk and Heidi on SV Due West for help and they stepped up big time. They called the marinas in Mazatlan for help, hounded the port captain to line up a tow, got us a slip at a marina, and coordinated these efforts and checked in with us repeatedly during the ten hours we were stuck out at sea in this condition. We cannot begin to express our gratitude and sincere thanks to Heidi and Kirk for all their help!

It was unclear to us exactly how the tow boat was going to get us into the slip at Marina El Cid. For the past hour I had visions of Juniper getting slingshotted into the slip and guess what? That’s exactly what happened! The tow boat pulled up on the tow lines, passed the slip, and swung us towards the slip and we were going pretty fast. Thankfully the slip we were aimed at was 1) large and 2) at a diagonal so we were able to get alongside the dock where I jumped off and quickly tied us up with zero damage. It was a ballsy move, one bordering on insanity, and while I was laughing at the execution and their resourcefulness, Scott was annoyed by the risk.

It was 7pm. We now wait for Monday to start the process of getting Juniper out of the water and fixed up.