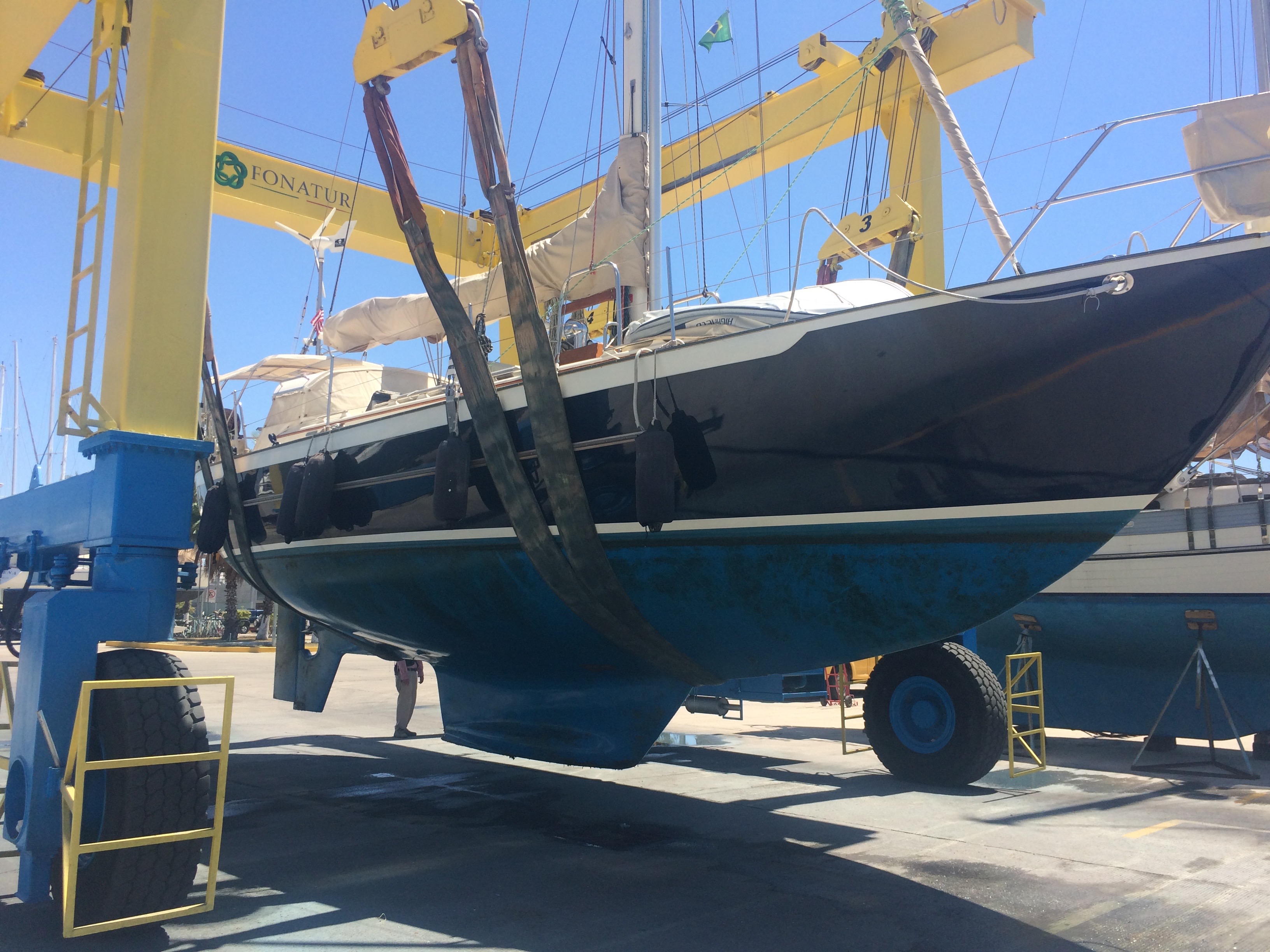 When David and Ernesto from Active Marine came by Juniper to see what was going on, they told us we were pretty lucky. With the bellows of our PSS shaft seal melted and seemingly hanging on by a thread, it appeared that melted rubber and a damaged cutlass bearing was keeping water from steadily streaming into the boat. Then David, who was in our engine room, yells out to us, “your motor mount’s broken, man! Your motor mount’s broken!”

Our engine sits on four motor mounts: two in the front and two in the back. The two in the back have “feet” that attach to the motor mount and one of those feet is what actually snapped in two.  A little bit about motor mounts. In a car or in a boat, a motor, or engine mount, is the part that holds the engine to the body, in our case to the body of the boat. Our engine and transmission are bolted together and held in place by four mounts. When they’re good, they also help keep noise and vibrations to a minimum. The rumblings we’ve been hearing on our last passage, the vibrations and the increase in engine noise were all signs that we were having issues with our motor mounts but we didn’t know to check them.

There’s some hustling as David and Ernesto start moving around, pointing their phone flashlights at the engine. “And the bolt on this motor mount has sheared off. ” They are both clearly surprised. A rush of words in Spanish, followed by Ernesto on his hands and knees taking pictures. “Wait, the bolts have sheared off on all the other motor mounts too! Your engine isn’t attached to anything on the boat! Your engine could have just walked right on out and into your cabin!”

Overview of the damage

The bolts have separated and the engine moved forward.

We look and see that except for the mount with the broken “foot”, the other bolts on the other three mounts are positioned next to each other. That’s now how it’s supposed to be. The bolts should be just one piece but they sheared off and our engine has moved forward towards the cabin. It’s also the reason why Juniper wasn’t flooded with water. As the engine moved forward it pulled the propeller forward into the boat thus blocking any significant water from getting in.  We all just silently take that in for a moment and Scott and I have our “holy shit” moment. “You guys are lucky, man,” David breaks the silence. We nervously laugh.

Why did one of them break? David thinks it was exposure to salt water, directly and indirectly. Indirectly? Yes, indirectly by having salt water in our bilge. The salt water heats up and releases salt into the bilge, finding its way to weak points such as our motor mounts, which are made out of iron and thus vulnerable to rust. When one broke, the engine began to move, putting stress on the other three motor mounts shearing off the bolts. As the engine started to move, the alignment of our shaft changed, which created friction on our shaft, shaft seal, and cutlass bearing. The reason that our engine room didn’t go up in flames is because salt water was putting out the fire.

How long did this whole thing take? How quickly did it go from the mount breaking , engine shifting, and damage-causing friction? We don’t know exactly when the motor mount broke and when the other mounts sheared off. We can guess that each time we heard deeper rumblings, a breakdown was happening.

The following day, David coordinates to have Juniper lifted out of the water. Over the next two weeks, we come to learn that our cutlass bearing was ground down to dust, the fiberglass tubing that the shaft goes through was burned and needs replacement, and our propeller shaft was ground down a bit, but not enough to warrant a complete replacement. Scott coordinates with the yard on which parts can be shipped and which ones to pick up in San Diego, and we take advantage of us being on the hard to get our varnish done and our bottom painted. We’ll likely be here for a few more weeks as our fiberglass tubing is a custom order, and there’s a lot of work to do.

Tow boat on our starboard side

Tow boat on our port side

Juniper out of the water

Where’s all the water?

In the meantime, we’ve got ourselves an AirBnB around the corner from the boatyard and we’re making the best out of this situation. At the very least, Sam is pleased that he’s no longer on the water!

One year ago: La Paz

One thought on “Juniper on the hard”