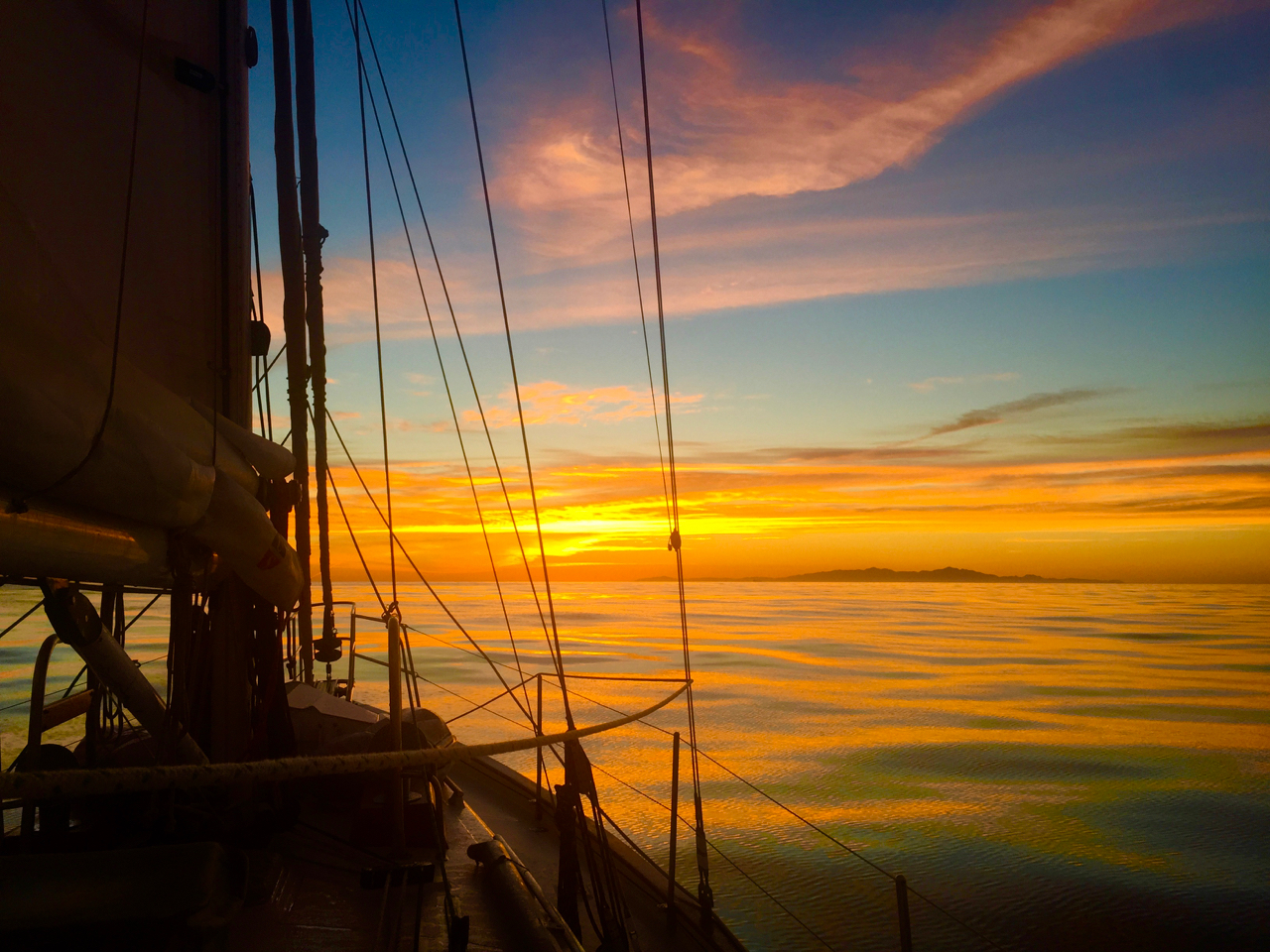 When Scott proposed that we quit our jobs and go cruising, the site, Interview With A Cruiser, was an invaluable resource to both of us to understand the realities of cruising and to glean lessons learned from those who’ve done it (and, the previous owners of our boat were interviewed back in 2012).  Livia, who founded the Interview With A Cruiser project, also created Newly Salted, so when she reached out to us asking if we’d be interested in an interview, of course we said yes! Below is our interview.

We’re Viviane and Scott. We’re in our mid-forties and we left San Francisco and our jobs in November 2015 to go cruising aboard Juniper, a 1999 Pacific Seacraft 40. We’ve sailed down to Mexico, where we’ve chosen to spend a few seasons exploring the Sea of Cortez and Pacific Mexico. We have some idea where we want to go next, but our long-term plans have yet to be determined. We’ve been blogging about our adventures on sailingjuniper.com.

What (if anything) do you wish someone had told you before you started cruising?

Viv: That you don’t have to circumnavigate. The previous owners of our boat circumnavigated, I read a lot of blogs, read Interview with a Cruiser, and I thought circumnavigation was just what cruisers do. It’s certainly what our friends and family thought we had in mind when we told them what we were doing and it’s also what strangers assume is our long-term plan. However, it’s not what we’re planning.

Scott: When we left San Francisco, all we were committed to was sailing to Mexico and evaluating our next steps from there. It’s likely we’ll sail to the South Pacific, but planning to sail around the world is not our goal. It seems obvious, but there are a bunch of cruisers who don’t circumnavigate. It’s just not what books and popular blogs are about.

What do you enjoy about cruising that you didn’t expect to enjoy?

Viv: I discovered that I love passages. I love night watches and watching the moon rise, catching shooting stars. I love early mornings and watching the sunrise. I love being alone in the cockpit and observing marine life around the boat. It find it meditative and rejuvenating. I can’t get enough of it.

Is there something you wish you had bought or installed before starting out?

We would love to have more solar. Juniper came with two well-worn 80W solar panels. On a good day we might see 8 amps coming for a few hours which, with our refrigeration issues discussed below, means we’ve had to run our engine every day at anchor to top off our batteries. We’ve just replaced these with two 150W panels which should help and we’ll be looking to add more soon.

What do you dislike about cruising that surprised you?

We dislike going into marinas. At first, we disliked it because our boat is hard to back out of a slip, and we had too much stress and anxiety around it, but now we dislike marinas because it’s so easy to get stuck there. Projects start, we get comfortable, and next thing you know we’ve been there for a month. No bueno!

What mistakes did you make as you started cruising?

Viv: Buying and bringing a lot of provisions. It’s important to bring items that are your favorites and that are difficult to find where you’re going, but there’s no reason to go overboard on staples. Even within Mexico, I was over-provisioning as if I would never find rice or refried beans in the next town. I learned to provision for where we’re going for the next month or two, to have extra in case of emergency, and to stop hoarding food.

Scott: Not enough SF Bay Area cruising before we cast off the lines for good. We took Juniper out for day sails often in the years we had her in San Francisco but we always found our way back to our marina at the end of the day. We should have spent more time doing short cruises to the delta, Tomales Bay, etc., to practice our anchoring skills and test out the boat systems that you depend on at anchor. We learned the hard way that many of these systems don’t like to work when they’ve been unused for an extended period.

While cruising, what do you do about health & boat insurance, medical issues, banking and mail delivery?

Health insurance is by far our biggest monthly expense. We’re using our U.S. insurance via the Marketplace and while we’re healthy and would rather self-insure, we’re afraid of letting our U.S. insurance lapse due to the ambiguities surrounding pre-existing conditions, deductibles, and our current administration’s stance on healthcare. We are still trying to figure this one out.

Our mail is being handled by SBI. While our bills are paperless, we still receive paper mail and packages. In addition to receiving all our mail and forwarding packages, they have a service where they will scan our mail and share it with us online.  They also helped us establish residency in the state of Florida. We’re very happy with them.

What is the most difficult aspect of the cruising lifestyle?

Saying goodbye. We’ve met some truly fantastic people who were on different journeys and it’s tough to bond with someone and then have them set sail to French Polynesia or finish cruising! It’s especially hard because we seldom meet cruisers who are around our age and we’re so excited when we do! Thankfully, there’s Facebook and Instagram to keep in touch, but it’s bittersweet.

What are some of your favorite pieces of gear on your boat and why?

Fans. It gets incredibly hot in the Sea of Cortez during the summer and we were really physically uncomfortable our first year. We have several small Hella fans stationed around the boat, but it’s not enough. We recently added a few 12-volt Caframo fans we can clip anywhere, either in our cockpit or down below when the breezes go away, and they really help keep us cool.

What piece of gear seems to break the most often?

Viv: Our refrigeration unit. We haven’t had a proper working freezer since leaving San Francisco. It’s a holding plate system that never gets quite down to freezing even though the compressor runs constantly. It’s frustrating as we’ve been troubleshooting it for 3 years now and it’s forced us to provision differently. We eat mostly vegetarian on the boat, but with our refrigeration woes, I’ve had to get very creative in how we provision and how we eat. While I would rather have a working freezer, I love working within constraints and enjoyed meal planning without refrigeration.

Scott: The refrigeration issues have had the most impact, but we’ve also had a stream of problems with our electronics. The system has spent most of the past decade in the tropics and the wiring is starting to show its age. There’s nothing quite like the adrenaline you feel as you enter an unfamiliar anchorage and your depth sounder and chart plotter stop working! We’re planning on upgrading the system, wiring and all, in the next year.

How would you recommend that someone prepares to cruise?

Be prepared for things to not go as planned. Because if things unexpectedly come to a complete stop, sometimes for a lot longer than you expect, having a good perspective on your situation will make a difference.  We’ve been in a marina in small Mexican town for six months now.  And it’s not because of a lack of preparation or prevention. Sometimes things go wrong all at once. While we have an amazing and trustworthy boat that we carefully maintain along with carrying an overabundance of spares, Juniper is 19 years old and unexpected things need to be replaced and random things break and sometimes they happen in rapid succession. We also had relatives get sick and pass away that required one of us to leave the boat and go home for months. We had our beloved sailing kitty, Sam, get sick and eventually pass away, and we stayed put because there was a vet nearby while we managed his care. None of the things we experienced in 2018 could have been predicted and they really threw us for a loop. Going with the flow and making mental adjustments helps us not be miserable.

What is a tip or a trick you have picked up along the way?

We love our preventer setup. It was important for us to have something that ran from the end of the boom to the bow, was always set up, but didn’t have lines getting in the way when the preventer wasn’t in use. We ended up with something very similar to what’s rigged on Morgan’s Cloud. It’s basically a two part system, with a length of Dyneema running from a padeye at the end of the boom to a cleat near the gooseneck. We then have about 70 feet of Sta-Set running inboard from the cockpit to a block at the bow, then outboard and tied to a stantion. When we want to deploy it we just go up on deck, tie the outboard end of the the line to the end of the Dyneema that’s stored at the gooseneck and we’re all done. Takes about 1 minute.

One thought on “Newly Salted Interview”