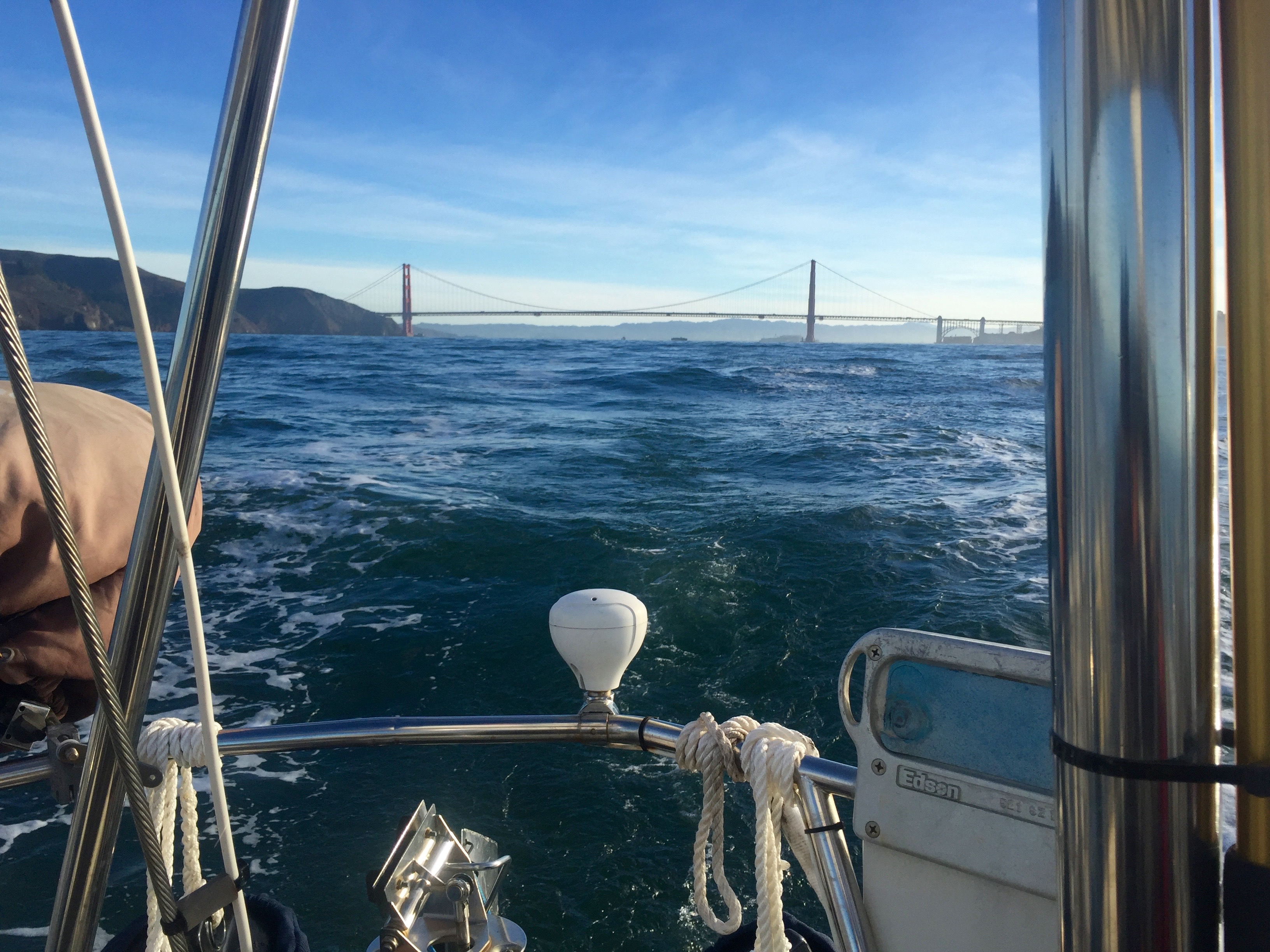 We spent the past two weeks staying at Marina Village Yacht Harbor in Alameda to finish up the last of our boat tasks: headsail repair, life raft service, getting a new dinghy, etc. The list of things to do never ends and at some point you just have to go.

We were at this point by early November but decided to hold out for better weather, especially since our first leg was meant to double as a shake-down cruise.

After patiently waiting for nice weather we finally checked out of Alameda and made our final passing underneath the Golden Gate Bridge on the morning of November 18. The forecast called for 5-15 knot winds and 6-8 foot swell. We motor-sailed all the way to the R2 SF shipping channel buoy so we’d avoid having to go over the SF bar.

The forecast held up pretty much except for a brief period of 20+ knot winds as we rounded R2 and headed south. We also ran into the marine layer and stuck with it most of the way to Half Moon Bay. We had about half a mile of visibility which gave us the excuse to play with our radar, looking for buoys that were on the chart, etc. The swell was right on our bow until we passed R2, then it was on our starboard beam for another two hours before we passed Colorado Reef and changed to a SE course. About that time the fog lifted and we had a really nice sail into the harbor with the swell on our stern.

The view coming into Half Moon Bay while we were still in the fog bank.

The view coming into Half Moon Bay

Viviane got a little seasick, but nothing close to what Sam (our cat) experienced. He started throwing up as soon as we left our slip in Alameda and was having a horrible time all trip. The v-berth up in the bow is the most uncomfortable place to be on a boat underway yet that was Sam’s go-to spot. He didn’t want to leave for any reason, including bathroom breaks, so let’s just say we had to take all of our bedding down to the harbor laundry room as soon as we got in.

We had intended on anchoring in the outer harbor. After surveying for a good spot Viviane went up to the bow to drop the anchor. The windlass didn’t work which isn’t a good thing. We haven’t used the anchor for a while but this was still a surprising discovery. While we motored around buying time to call into the harbor for a slip and set up the fender and dock lines the wind started to build. By the time we went into the inner harbor to get to our slip it was blowing a solid 15 knots with gusts over 20 right on our port side. This made getting into our slip very difficult. Fortunately we were able to get in with minimal boat rash on our third attempt.

We expected to stay just one or maybe two nights in Half Moon Bay. It turned into four as we worked on our anchoring gear, cleaned up after Sam’s explosion, ran on a few errands, and met up with friends who live in the area. It’s a beautiful area and I wish we had more time to really enjoy it, but sometimes tasks just need to be done.

Ball of rusted up anchor chain

Viv in the anchor locker working on knots.

There’s some bad weather expected in a few days so we decided to get up at 5am for an early departure to Santa Cruz, about 7 hours away.