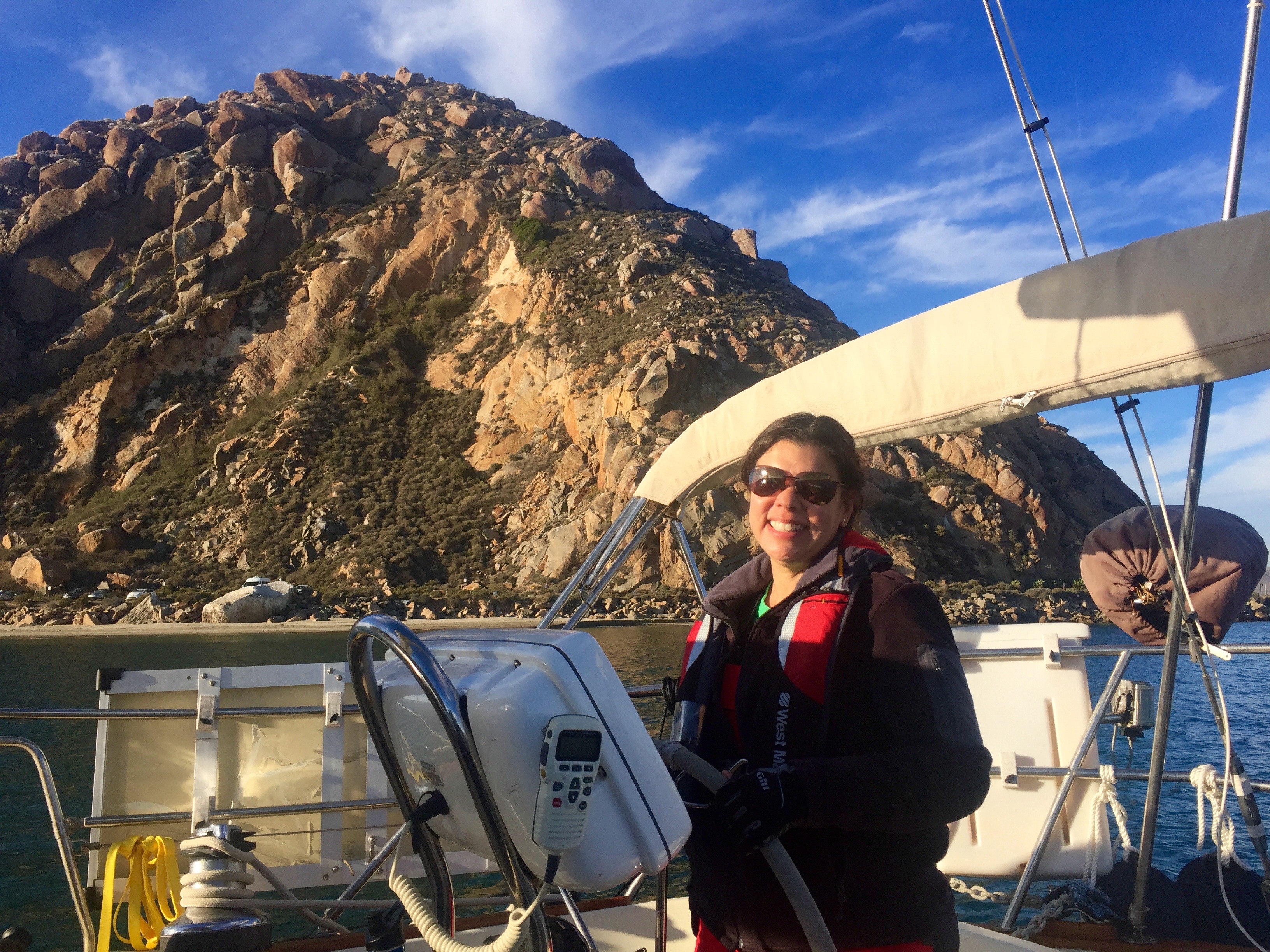 After much weather stalking (my new term for Scott’s obsessive checking of various weather sites to try to get a good picture of what’s being forecasted), and googling about other people’s experiences rounding Point Conception, and reaching out to locals for info, we found the right weather conditions and decided on our route.

We both were surprised by how much we liked Morro Bay and how much there’s to do in this little town. As we sailed out, Scott and I remarked on how much our stay exceeded our expectations.

We managed to sail for a bit with winds around 9 knots. While we shook out the second reef we had in from our sail down from Santa Cruz to Morro Bay, we did decide to keep one in since we had no idea what kinds of wind to expect when we reached Point Arguello and later, Point Conception.

As expected, our winds died and we turned on the motor. The winds and seas were calm for a very long time as we rounded Point Conception. The area notorious for wind didn’t even offer up a breeze! We ended up motoring the rest of the way to Santa Barbara.

It was a pleasure pulling into sunny and warm Santa Barbara!  Even Sam the cat, typically seasick out of his mind, climbed out of the cabin while underway to seek the sunshine. We easily side-tied to the guest dock and both of us headed to the Harbor Office and got our assigned slip.

Everything was great until we tried pulling into our slip.

Here’s the thing: I do all the close quarters maneuvering. When it’s time to pull into a harbor, a slip, or a fuel dock, I’m at the helm. It’s kind of stressful for me and every time I have to pull in or out of a slip I’m sweating it, but more often than not, it’s uneventful, but it’s hard to remember that when it goes sideways. Sometimes literally sideways.

As I motored into the fairway and turned towards our assigned slip, a strong wind blew the boat – whooosh – right past it. A standing turn in response resulted in us being blown sideways towards boats. Scott’s quick thinking saved our boat and another’s from damage by grabbing a fender and shoving it in front of the bowsprit right where the two were going to meet. Meanwhile, I’m almost panicking and every maneuver I’m making to stop us from plowing into boats is unsuccessful. Unable to properly maneuver as we were at the end of the fairway, I took advantage of our sideways motion, reversed, and stopped the boat at the dead end of the fairway, sideways. This wasn’t a proper berth at all, much less a place we were even supposed to be in, but we would be able to tie up the boat and keep her here safely until the winds died down.

We ended up staying at this makeshift berth overnight, with the blessing of the Harbor Patrol, who came by, saw our predicament, experienced the wind in the fairway also blowing their boat sideways, and told us to stay put until the winds died down. Good thing, because I had no idea how to get out of our situation and needed time to research what to do. I felt really embarrassed about the whole thing and kept churning over the day’s events all afternoon and into the night.

Early the next morning, Scott and I walked around the boat at the dock, talking through our strategy. We’ll use a spring line to direct the bow away from the dock and into the fairway. After positioning fenders at our stern, we successfully and safely left our makeshift berth and entered our assigned slip without incident.

Now that we were in our proper slip. We relaxed and… got down to work! Yup! for our first four days in beautiful Santa Barbara, I waxed the deck, polished the chrome, and touched up the varnish.

We did other things of course. Spent a ridiculous amount of time at Brophy’s, had a wonderful breakfast at D’Angelo’s Bakery, enjoyed many margaritas and snacks at Cielito, toured the lovely courthouse and stopped by Mission Santa Barbara. We even stopped by the Reagan Ranch Center which was super interesting if you grew up in the ’80s like we did.

We’ve been in Santa Barbara for over a week now. Initially, it was because we spent a lot of time doing boat work, and wanted to relax and enjoy the town, but as the week wore on, it was because of nasty weather making it’s way down to us from Alaska (our PNW and SF friends know what we’re talking about). We’ve spent many a day thinking we were going to leave but instead, called the Harbor Office and requested another night. They started to recognize Scott’s voice! Keep your fingers crossed that we actually set sail for Ventura tomorrow!