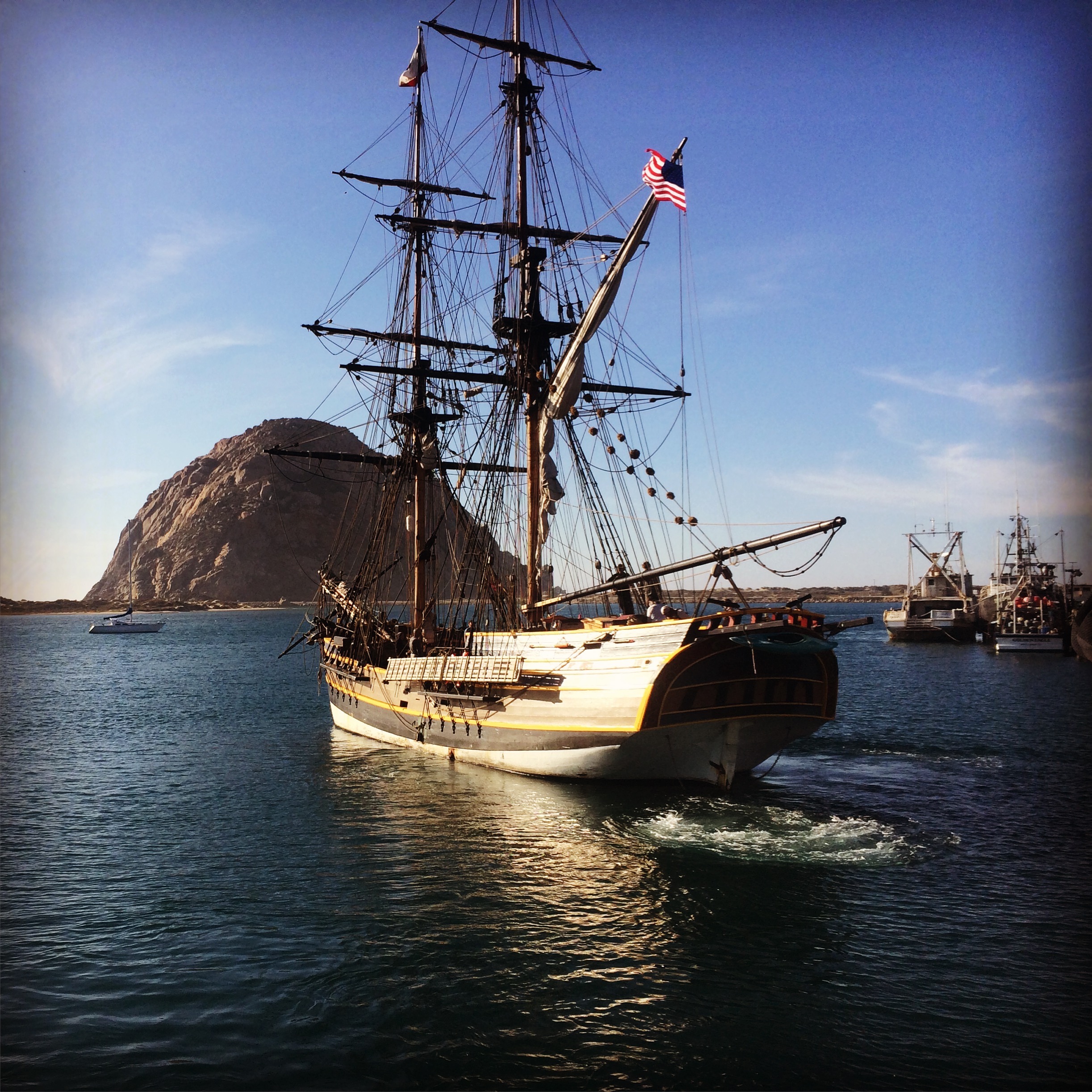 I pulled the boat out of our guest slip and two standing turns later (thanks to channel traffic) we side-tied next to the fuel and pump-out dock in Santa Cruz. “Do you want to top off the tank?” I asked Scott.

Sailing from Santa Cruz to Morro Bay takes about 21 hours. This means Scott and I would need to sail overnight. If you would have asked me whether I was worried about doing an overnight sail, which involves “watches” where one sleeps for three hours and the other keeps an eye out for other boats, checks sail trim, makes sure we’re on route, and then switches off, I would have said “YES” very loudly. But when it was actually time to do an overnight sail, I surprisingly felt pretty indifferent about it.

While it was cold, it was pleasant and we had wind for quite a long time. As day turned to night, I went down below for a nap while Scott stayed in the cockpit keeping watch.

When it was my turn alone, I watched the moon rise, saw the milky way, and marveled at how quiet everything was. I kept expecting to get spooked, or for something bad to happen. But, it was nice. I actually enjoyed it.

At around 8am the next morning, the winds picked up and we had to reef the mainsail. A comfortable sail turned uncomfortable as the wind started coming right on our nose and we bashed up wind. It’s cold, so it’s no fun when you’re standing at the helm and getting sprayed.

As the hours went on, the wind was high, the water was choppy, and we were double reefed. We were a little worried about getting into Morro Bay under these conditions, and actually debated skipping it altogether and heading straight to Santa Barbara instead. Scott went down below to check charts and noticed that we were running on empty! We totally should have filled the tank while at the gas dock in Santa Cruz! I got on the phone with Morro Bay’s Harbor Master to ask about harbor conditions. Everything was good there, so pulling into Morro Bay made sense.

And we’re sure glad we did. The weather in the harbor was calm and lovely (we would later learn from a local that Morro Bay’s reputation as a dangerous harbor only holds true roughly four times a year). As soon as we tied up to Morro Bay Yacht Club’s dock, people were on the dock saying hello and welcoming us.

Morro Bay is an active commercial fishing harbor and their fuel dock is meant for commercial vessels. It’s not a dock even but a tall pier. The fuel pumps are way at the top and there’s a ladder for you to climb up from your vessel. There’s no protection to prevent your vessel from bumping along the pilings. Scott and I took a look at that as we came in and pretty much nixed pulling alongside it. What that meant was four roundtrips to the fuel dock by foot with our 5 gallon jerry can.

It was tedious, but it gave me an opportunity to have several conversations with Sandy, the fuel attendant, and learn about slime eels – aka hagfish – that he takes care of for the fish market that owns the fuel dock. Of course, after I’m done, I learn from Port Captain that there was a fenderboard available (a board that ties up in front of your fenders to protect your boat from rubbing against pilings) for all visitors to use.

While on my diesel run, the Lady Washington was at the fuel dock drawing a crowd. It took a while for them to fuel up. I lost count at 500 gallons of diesel (we carry 110).

While we’re enjoying Morro Bay, we’re thinking about Santa Barbara, which promises to be even warmer. However, to get there, one has to round Point Conception, commonly called “The Cape Horn of the West.” We’re taking our time to find the right weather window (you want to go at night, and have calm enough conditions that you have to motor). In the meantime, we’re enjoying hanging out in Morro Bay.