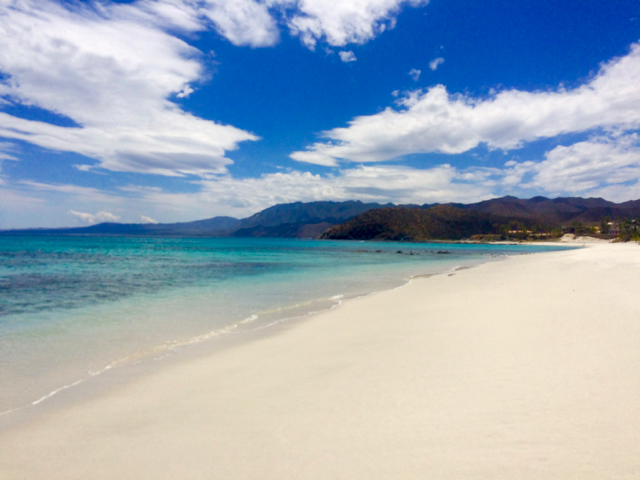 We left for Bahia de los Muertos at the same time as two other boats also anchored at Los Frailes. That means we were racing even if the other boats didn’t know it. We arrived first, finding one other boat already anchored there. We were barely settled when the anchorage filled up with more and more sailboats, one of which was Due West. Manned by Heidi and Kirk, we were well acquainted with the boat and their adventures, having been following their blog for quite some time now. We were very excited to see them anchor, and I was looking forward to meeting Heidi in person, a Facebook friend and fellow member of Women Who Sail, a group dedicated to women sailors.

Heidi and Kirk came by our boat and we spent a lovely day talking and enjoying a really cool restaurant at the Gran Sueno resort (Bahia de los Muertos, which means Bay of the Dead, is transitioning to being named Bahia de Suenos, Bay of Dreams. I get it, but I like the history of why it’s called Bahia de los Muertos). The restaurant, Centro de Trenes, is beautiful and has a train track with working model trains elevated high over the bar and restaurant seating. The restaurant also has really good ceviche and an amazing salsa made of guajillo peppers and roasted tomatoes that I really wish I could eat every day. Plus, they were very gracious and welcoming to us, a salty bunch of folks in flip-flops and sandals who wander up from the beach into this fancy resort!

We finally launched our runabout! We’ve been waiting for calmer winds and waters to launch the dinghy for the first time. Outside of us busting an oar lock (seriously, how lame), it went well, and we made it to shore and hung out at the Palapa restaurant 1535 for a spell.

We’re still settling into life on a boat. Showering has been… um… sporadic so far. We do have a watermaker onboard (it takes seawater and makes potable water through reverse osmosis) and we’re working on getting into a rhythm where we’re keeping our tanks full and conserving water. We brought a solar shower along and want to use it, as it’s much more economical compared to using our built-in shower, but it’s been cloudy in Los Muertos.

The freezer/fridge is still on vacation, but is managing to draw a lot of power from out batteries with little results. It’s a freeloader at this point, but Scott is working with a rep on troubleshooting it.

This is why god created dinghy wheels.