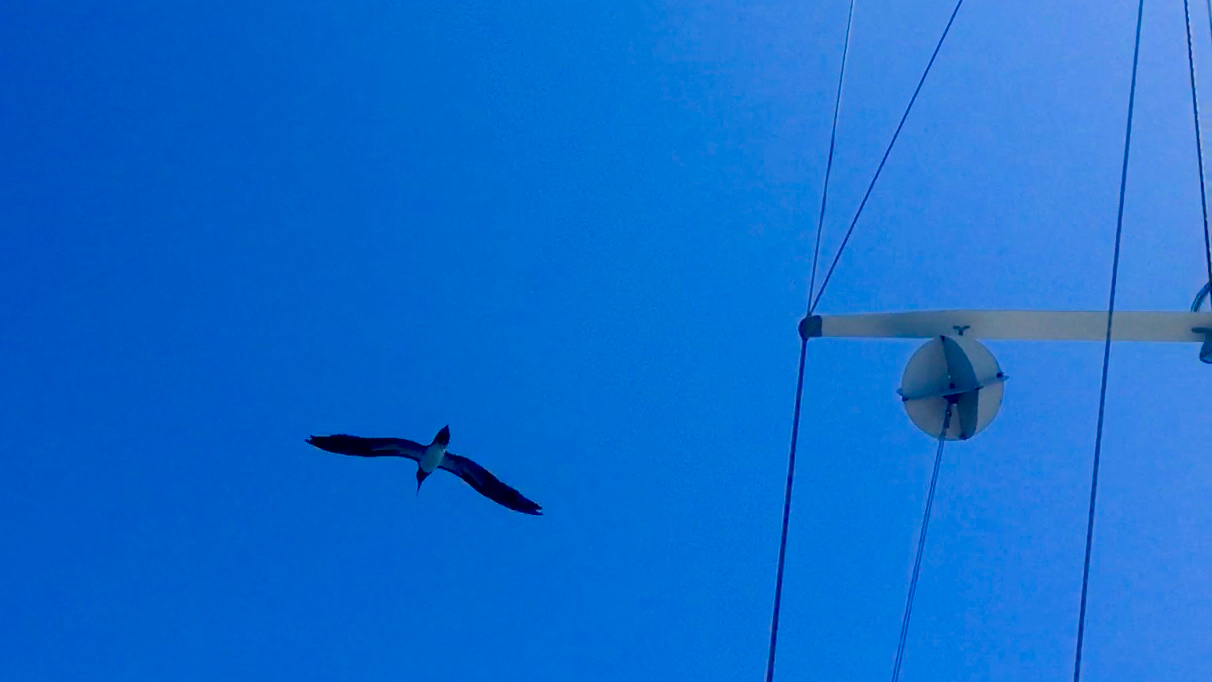 July, 2016 – After leaving Isla Coronado we headed towards Bahía Concepción and El Burro cove, where Geary holds his annual Fourth of July BBQ. It’s a long trip and would require an overnight stop in San Juanico. On the way we spotted Orcas about a half mile out. We watched them through binoculars for a long time and I unsuccessfully tried to convince Scott that we should alter course to get closer to them. He wasn’t into my idea. Even though they were half a mile away, you could see that they were huge! I really wanted to see them!

We anchored in San Juanico with four other boats and were about to bring our dinghy down to check out the area when the wind and swell picked up fast. It got bad enough for us to abandon any ideas we had about going to shore. It was like this all night so we picked up our anchor at first light and made our way to Bahia Concepción.

The trip was one of our better ones. We had to motor for a little while, but we ended up finding some good wind, altered our course just a little bit to keep it, and ended up sailing all the way into Bahía Concepción. This was some of our best sailing yet!

As we entered Bahía Concepción, we noticed two Blue-footed Boobies enjoying the wind against our sails. They used it to stay aloft without expending too much energy, and would dive bomb into the water for food. They stayed with us until we took the sails down to anchor.

Once in Bahía Concepción, we wanted to anchor in El Burro since that’s where all the 4th of July action would be but we counted six boats already anchored and it’s a small cove. Playa Coyote was empty and separated from El Burro by a reef and was a brief dinghy ride away, so we decided to go there. We were blown away by the beauty of the place. The water was so clear that you could easily see the bottom. It gets really shallow in both coves and we almost ran aground as it goes from 30 feet to 8 rather quickly!

Anchoring in Playa Coyote felt like we were in some fantasy version of sailing. A “this was what the brochure promised” kind of thing. No one around us, clear blue waters, an impossibly bright blue sky and incredible scenery. We snorkeled around the reef separating Playa Coyote from El Burro and found ourselves having the best snorkeling experience of our trip so far. When we weren’t snorkeling we were swimming around the boat or just floating on our pool noodles in the warm water. It was pretty heavenly.

While we found El Burro a bit too crowded for comfort, it didn’t stop more and more cruisers from anchoring within it and at times, I had a bit of FOMO since everyone was over there, but we had Playa Coyote all to ourselves and that was amazing (it wasn’t until the day of the BBQ that we had neighbors). We met a lot cruisers, many of whom we recognized thanks to the Amigo Net. We had a great time meeting everyone and playing Mexican Train all day long with Liz from S/V Espiritu. Thank you Geary for hosting such a wonderful event!

4th of July at Geary’s

After July 4th, everyone started to head out and it was time for us to move on as well. While Bahía Concepción has been amazing, it also has been searingly hot and both Scott and I needed a break from the intense heat. We stopped for a few days in Playa Santispac, Santo Domingo, and Punta Chivato before heading out of Bahía Concepción and over to Sweet Pea Cove on Isla San Marcos, where we would be on the lookout for chubascos (squalls that come over from the mainland to Baja, typically late at night) before crossing the Sea of Cortez to San Carlos where we would keep Juniper for the peak of hurricane season.